Reprinted with permission of Gerry Dawes. 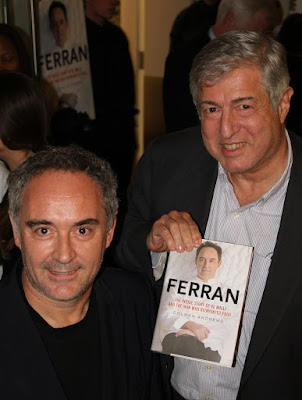 Ferran Adrià  and Tim Zagat at the book launch
at the International Culinary Center in NYC on Oct. 12, 2010

Ferran: The Inside Story of El Bulli and the Man Who Reinvented Food by Colman Andrews, a book review excerpted from my article on Ferran Adrià in the October issue of Food Arts.  (All photographs by Gerry Dawes copyright 2010.) 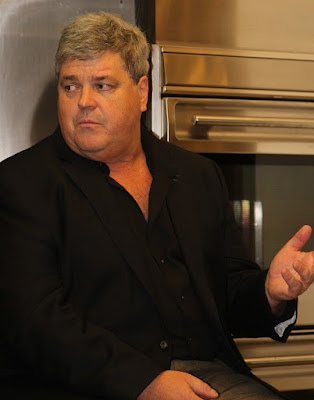 Colman Andrews, author of
Ferran: The Inside Story of El Bulli and the Man Who Reinvented Food
"Colman Andrews first began thinking about writing a book about Ferran Adrià at the historic Culinary Institute at Greystone's "Spain and the World Table," conference in November, 2006. At that conference there was a particular poignant moment that was the climax of what Andrew's calls "a hugely ambitious, highly successful . . . program," when The French Laundry's Thomas Keller introduced Ferran Adríà to tumultuous applause. Thomas Keller at the Culinary Institute of America – Greystone
during his introduction of Ferran and the Spanish chefs during
the 2006 Worlds of Flavor Conference dedicated to Spain. 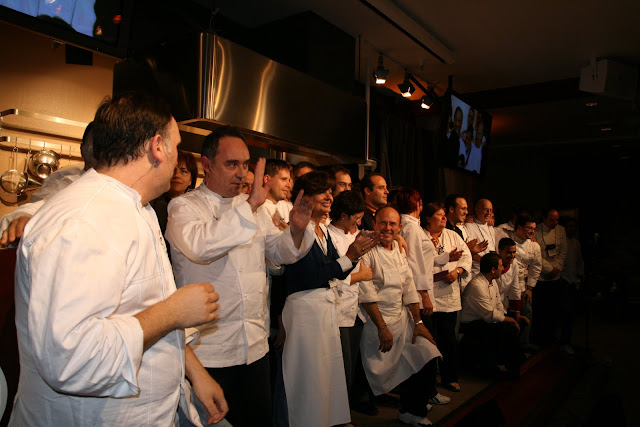 Ferran Adríà and the all-star lineup of Spanish chefs
at the CIA Worlds of Flavor Conference 2006.
Coming after the 2003 The New York Times Sunday Magazine article, Arthur Lubow article that posed the question, "Is Spain the New France?", the French-trained, Francophile Keller's introduction was something very much like the passing of the torch to Spain and to Adrià, who for nearly a decade now has been called "the world's greatest chef" and his restaurant, elbulli, "the world's greatest restaurant." That moment at the CIA-Greystone well may have been the greatest event in Spain's long culinary history. 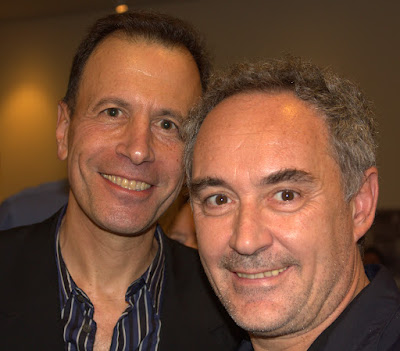 Ferran Adríà and Arthur Lubow at the book launch
at International Culinary Center in New York.
Andrews-with the help of elBulli (the official name of the restaurant) alumni, Ferran Adrià confidant and chef-restaurateur José Andrés "kept after" Ferran for nearly a year. At one point, Andrés told Andrews, "If he thinks this is my idea or your idea, he will maybe not be so eager to say yes. He has to think it is his idea." They both persisted until Ferran told Andrews, "the next time you are Barcelona, we'll talk." Andrews quickly booked a flight to Barcelona, where he long felt at home since he spent a lot of time there two decades ago writing his seminal book on the food of Catalunya, Catalan Cuisine: Europe's Last Great Culinary Secret (Atheneum, 1988). 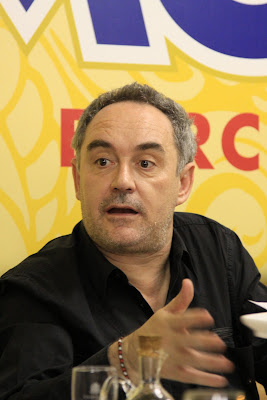 Ferran Adríà at Inopia.
Andrews managed to pin Ferran down over dinner at Inopia, Ferran's brother Albert's happening tapas bar (he just sold it; see accompanying article). At the end of a meal that featured traditional Spanish tapas-white asparagus , five kinds of olives, jamón Ibérico from Salamanca, esquiexada (Catalan shredded raw salt cod salad), fried artichokes, fried boquerones (anchovies), pa amb tomaquet (Catalan grilled bred rubbed with tomato and garlic) and small grilled shrimp, washed down with a crisp Catalan white wine, Andrews asks himself about whether he had the green light to do this book, "Was this (Ferran's) capitulation?" 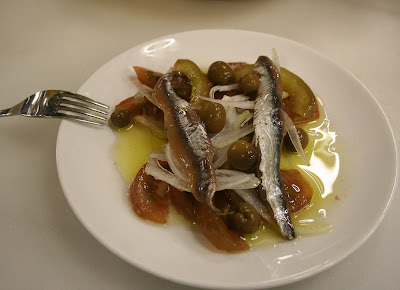 Boquerones en vinagre with olives and raf tomatoes, Inopia.
All those who needed a book on Ferran-I am one of them, even though I have known him for nearly fifteen years-that tells you everything you need to know, but were always afraid to ask, about the man, his restaurant, his dimension-bursting food, his partner Juli Soler and the truth and mythology that surrounds elBulli, this fine, eminently readable treatment is a blessing. Colman Andrews has done a brilliant job with this nearly 300-page book, despite what the misguided review in The New York Times claimed. 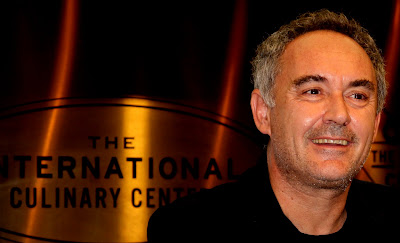 Readers will come away from Ferran: The Inside Story of El Bulli and the Man Who Reinvented Food with an infinitely greater understanding of the "world's greatest chef," who indeed reinvented (and continues to reinvent) food in the 21st Century. The only negative in the American edition is that there are no photographs; the European edition apparently has them."
About Gerry Dawes: Press, Awards, Tours to Spain, Television Trailer, Contact Info
Insider’s Deluxe Taste of Northen Spain Gastronomic Tour of Bilbao – San Sebastián – Navarra – Barcelona Nov. 27 – Dec. 5, 2010
0
This entry was posted in Books, Culinary Personalities, Food Lit, Spain, Travel and tagged Colman Andrews, Ferran, Ferran Adria, Gerry Dawes. Bookmark the permalink.